In our role as super cool parents, Jill Y and I like to encourage little Dill Y in everything he even thinks about doing. There are exceptions of course and like all 5 year olds, he changes his mind all the time. Recently he wanted to be Santa Claus, Jesus Christ and Barney. A quiet word later and he knew that 2 of them don't exist and that there's only one Barney. He has some interesting hobbies. When he gets in from genius school, he heads straight to Photoshop and mixes people from different races, together. When we ask him why he does it, he tells us that the world would be a better place if all people could harmoniously exist side by side, regardless of their race. Sounds good to me. At first we were scared to give him a scissors but he learned at an early age that scissors are for cutting up pictures of Bon Jovi and nothing else. His latest hobby is bird watching but something tells me, he hasn’t quite got the hang of it yet: 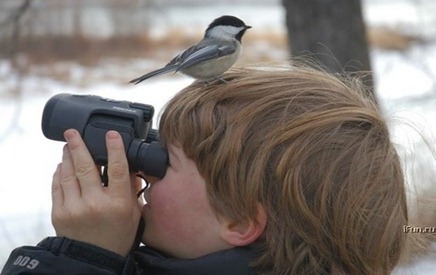