Two of Thirsty Dave's drinking companions had finished a hard days drinking and were as hungry as a hungry hungarian hunger striker who hadn't eaten for a long time. It was the early hours of the morning and they headed to the only fast food joint that was open. When they got there, they were horrified to learn that the only part of the establishment that was still serving was the drive through. They were faced with a serious dilemma. They had a huge dose of the munchies but neither was in any fit state to drive. That coupled with the fact that neither of them actually had a car or could drive, only made matters worse. Then they remembered that little known saying "Give a man a drink and he'll drink it straight away but give a man an art degree and he'll never go hungry" 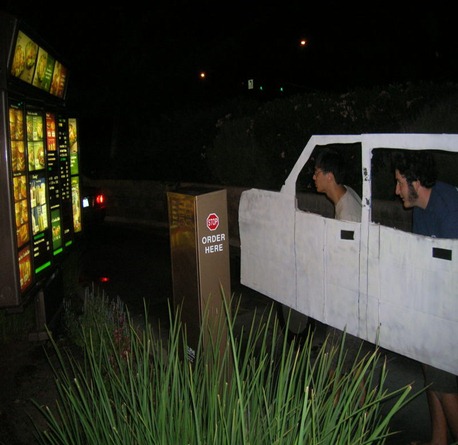 Email ThisBlogThis!Share to TwitterShare to FacebookShare to Pinterest
Labels: as hungry as a hungry hungarian hunger striker, Give a man a drink and he'll drink it straight away but give a man an art degree and he'll never go hungry, Thirsty Dave
Newer Post Older Post Home