Thirsty Dave’s neighbour, Handy Andy Anderson is going through the change of life. His wife has slowly but surely been changing him into a grown up. He’s stopped coming out to play with the rest of us, doesn’t drink and now goes to bed at 9pm. Mrs. Anderson has told him that he has to sell his beloved 1995 Nissan but Handy loves that car more than bacon and has up until now, been putting it off. He finally agreed to place an ad in the local paper but I’m not sure if he understands exactly how ads work: 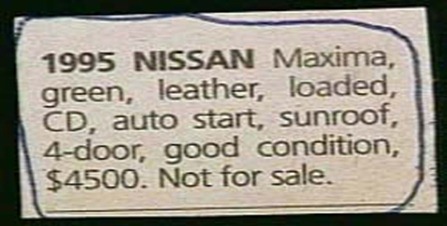