Every now and again, we count our money and realise we haven't got any. It's at times like this that we try and come up with an invention that will make us multi-trillionaires. I gathered the collective, knocked our heads together but somehow I don' think our ideas are out and out winners. Sugartastic Daddy John's idea was to purchase a premises, install a large screen and charge people to watch films on it. He was as happy as a man with B negative blood can be until we told him that the cinema has been around since the eighteenth century. I had to stop Thirsty Dave in his tracks when he excitedly told of his idea of mixing fluoride, tetra sodium pyrophosphate, sodium bicarbonate, triclosan, desensitizing agents and hydrogen peroxide together to put on teeth to make them whiter. He was disgusted when I told him that toothpaste is available in all good tooth shops. I was thinking of something that would be as soft as a pillow but not a pillow itself. It had to be disposable and an everyday product. Jill Y is always telling me to clean up after myself and I thought I hit the nail on the head until I went to the toilet and there before my very eyes was my idea with the very same name that I was thinking of: 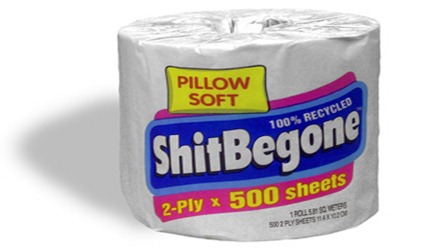 Email ThisBlogThis!Share to TwitterShare to FacebookShare to Pinterest
Labels: as happy as a man with B negative blood can be, humour, I don’t think we’ll be multi-trillionaires any day soon, Its good to cat mock, Jill Y, Mocking, Sugartastic Daddy John, Thirsty Dave
Newer Post Older Post Home