The many similarities between me and Bear Grylls.

Jill Y reckons I have a lot in common with Bear Grylls, the youngest Briton to climb Everest until someone younger managed to do it. I've yet to climb Everest but I was the youngest person to ever hate Bon Jovi. When I was 27 minutes old, I hated them for the first time and I can't see the flames of hatred being doused for my next 3 lifetimes at least. Bear spent 3 years in the British Special Forces while I spent 3 years trying to figure out how many i's are in Mississippi. Bear grew up in Northern Ireland and I grew up in Southern Ireland and the similarities don't end there either. After leaving school, Bear considered joining the Indian Army and spent a few months hiking in the Himalayan mountains of Sikkim and West Bengal, Assam. After school, I went behind the bike shed with Scurvy Jane and spent a few months hiding from her parents in places they wouldn't think of looking for me. At this stage you could be forgiven for getting Bear and I mixed up because the similarities are so similar but there's one thing we don’t have in common: 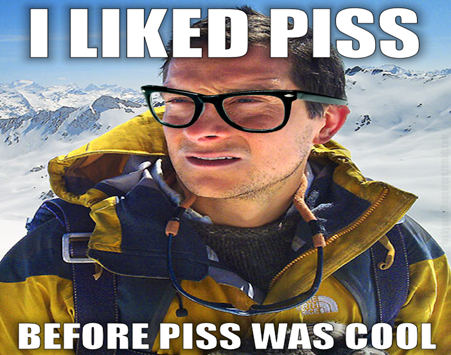