The mystery of MC Hardly Handsome Harvey and the squeaky sound

We went to see our fifth favourite band 'The Angelic Murderers'. They play a kind of death metal, gospel music with a lyrical emphasis on the months of March and April, 1997. They're a very polished band and before they go on stage, they usually have our good friend MC Hardly Handsome Harvey say a few words to warm up the audience. The lights on the stage were dimmed which is usually the cue for Hardly Handsome to do his thing but there was no sign of him at all. All of a sudden we could hear a loud "squeak, squeak, squeak" coming from the speakers. The lights didn't come on and once again we heard the loud "squeak, squeak, squeak". There was still no sign of Hardly Handsome and I'm not the type of mocker who lets these things happen without finding out the reasons behind them. I finally found the Hardly Handsome one at the bar and then took a picture of the stage with the camera Jill Y got back from the pawn shop and things started to make sense: 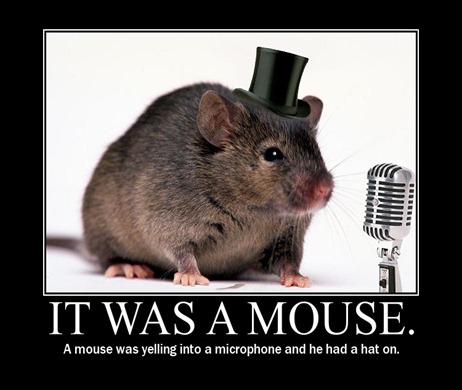