Thank gods for the news and thank gods for television news. Believe it or not, even the current affair junkies at It’s good to mock, can’t always be aware of global happenings. It’s at times like this that we turn to television news and our favourite is CNN. CNN doesn’t mess about with minor issues such as recession or global warming. CNN focuses on the real issues like the story of Binwen. Binwen is a rice farmer from China and damn good at his job he is too. His father was a rice farmer as was his father before him. Yesterday morning, Binwen was working away in the hills when all of a sudden, a bag of rice fell over. If it wasn’t for CNN, we would probably never have been made aware of the incident at all. It turns out the stock market remained calm but things could of turned out so different: 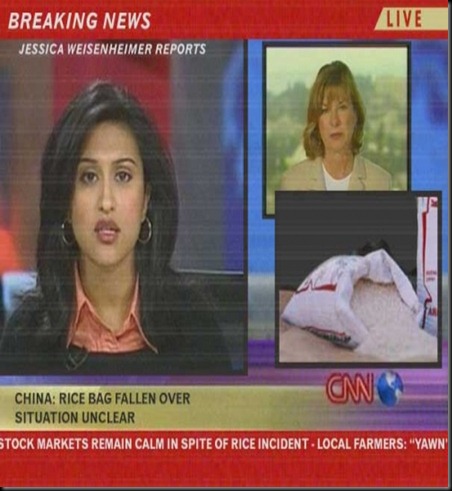