A rainy day in our world of little

We don’t have any money. We’re broke. We’re as broke as as a joke that has no money and will be paying back the bank for its next 4 lifetimes. It wasn’t long ago that we could afford things like hope and dreams but that was then and this is not. If there’s one positive thing that’s come out of all of this, it’s that we’ve learned to use our creativity to come up with creative ways to save non existent money. Jill Y was taking Pebbles for a walk last night and it was raining. Rather than go to the dog clothes store and buy him a raincoat, she fashioned a fashionable garment to keep him dry, out of nothing but an empty Fanta bottle: 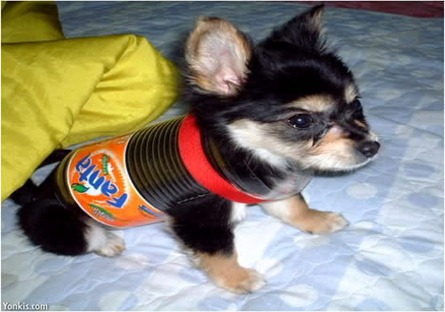 Email ThisBlogThis!Share to TwitterShare to FacebookShare to Pinterest
Labels: A rainy day in our world of little, as broke as a joke that has no money, humour, Its good to mock, Jill Y, Mocking, Pebbles
Newer Post Older Post Home