Some things are unavoidable. When I was a little mocker, I would misbehave to the max so my parents came up with a unique way of punishing me. They knew the sound of Bon Jovi would cause me to be violently ill so they would force me to listen to Jon’s whiny, whinging to the soundtrack of some of the blandest, middle of the road, paint by numbers, songs imaginable. I realised at an early age that how you act in times of adversary, is what builds character. So I looked my parents in the face as they played that awful music, with a big smile on my face and I took my punishment like a man. Little did they know that I had a tiny pair of earphones and was actually listening to Tom Waits. Soon after they realised that Bon Jovi could no longer poison my nervous system, they stopped playing it. Today I was reminded of this story when I heard about Cody Kapaun. The little guy was told some shocking news but he faced it like a man, with a smile on his face: 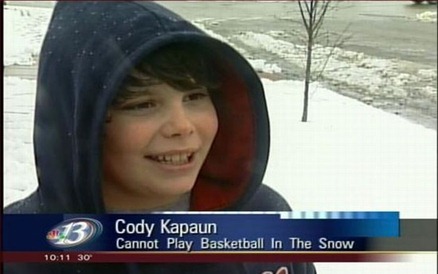