Thirsty Dave has been asking a lot of questions lately. He usually only has one question and it’s usually directed at the barman. He’s taken a keen interest in parenting even though he has no kids. He especially wanted to know how our son, Little Dill Y, became so smart. We told him it’s due to his strict diet of hatred for Bon Jovi and his 5 year old life’s work in trying to figure out how magnets work. The thirsty one started taking notes and Jill Y and I didn’t ask him until last night, why he, all of a sudden became so interested in parenting. He told us that the new off-license had a ‘no dogs allowed’ sign outside and he loves bringing his dog with him when he stocks up on alcohol based products. It turns out he’s been making his dog smart by applying the same principles as we use on Little Dill Y. We thought it sounded a bit strange until he showed us the fruit of his labour. He only went and taught the dog a trick to get around the ‘no dogs allowed’ issue: 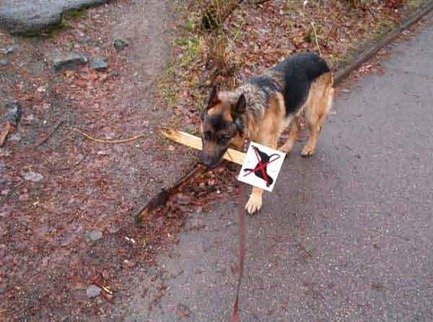