Never trust Thirsty Dave with anything that involves anything

Nobody knows how or why it happens but once or twice a year, Thirsty Dave miraculously becomes sober. I personally think it has something to do with having no alcohol in his veins but that’s just an uneducated guess. If you happen to meet him during one of his rare moments of clarity, he actually makes sense and communicates in an almost human fashion. Sugartastic Daddy John thought it might be fun to see what he was like when he was given some work to do. The Daddy asked him to look after one of his shops for an hour, while he went for a bit of lunch. As he arrived back, he immediately knew he had made a mistake as there was a less than inviting sign in the window: 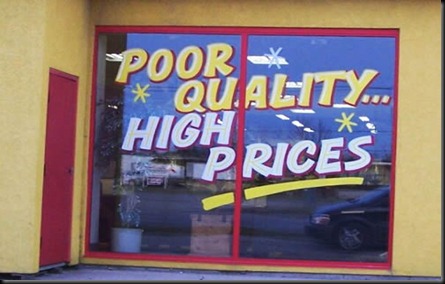 Email ThisBlogThis!Share to TwitterShare to FacebookShare to Pinterest
Labels: humour, Its good to mock, Mocking, moments of clarity, Never trust Thirsty Dave with anything that involves anything, The Daddy, Thirsty Dave
Newer Post Older Post Home