Signs of a thief

Although we're not trained in common sense, we do have a degree in ridiculousness and this sometimes comes in handy. Like Maths or how magnets work, this might be hard to explain but we’ll give it a shot. The story of Little Dill Y so far is that he’s a 6 year old budding genius who will one day become president or even a Maths teacher. He’s as smart as lots of smart grown ups put together in a room with other smart grown ups. Up until last week, his behaviour has been as impeccable as Thirsty Dave’s band The Right On Righteous Revellers Who Are Always Right On but recently his behaviour has been erratic to say the least. He’s started stealing things and I don’t mean his Mother’s sense of humour. He’s started stealing segments of signs. For some reason he doesn’t steal a whole sign, just a portion of it and now his room is full of partial signs. It’s turning into an issue and the local council have started putting up signs, warning of people who are stealing parts of signs: 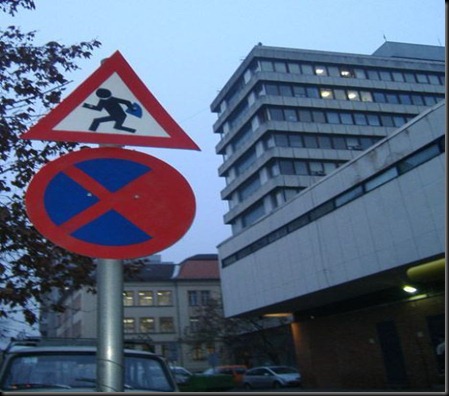