Little Dill Y is only a little grown up

"I'm not saying Bon Jovi are a bad band but they're definitely not a good band", said Thirsty Dave about Bon Jovi. We like to think we're dragging  Little Dill Y up the right way but he's getting a bit too clever for his 6 year old boots - his actual boots aren't 6 years old, he is. Jill Y and I wouldn't be the type of parents that get stressed out about things, preferring to groove our way through life to a non existent James Brown soundtrack. Some Bible preacher knocked at the door and told us that God created everything. He told us he didn’t like Bon Jovi so we invited him in for coffee and Dill Y said to him “If God created everything, then who created God?” We’ve never seen such a massively confused look on anyone’s massively confused face and preacher man made his excuses and left. It was fun at the time but I think that question has had a profound effect on the little guy. He sat down last night to do his homework. He normally loves homework but for some reason, he didn’t want to do his Maths. When we asked him why, he wrote out this explanation: 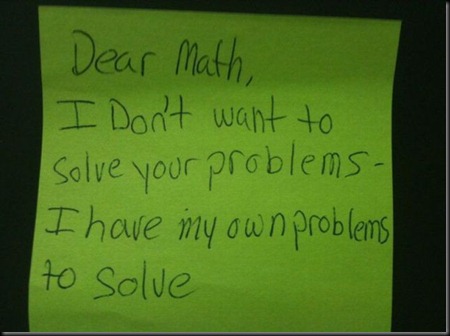