Jill Y set me a challenge. I was to write a post with the title ‘It’s funny because Christians don’t believe in reincarnation’. Though I had no idea what the hell I was going to write about, I immediately accepted the challenge. When it comes to Jill Y, I’m always second best. It doesn’t matter where I hide the credit card, she somehow instinctively knows where to find it. I’ve never won an argument because she uses common sense and knows damn well that when it comes to common sense, I’ve more chance of understanding Maths than I have of getting my head around it. The thought of getting one up on her was just too good to miss, so I just accepted the challenge without giving it a second thought. Then the enormity of the task began to sink in. The blog is updated daily which meant I had until the end of the day to come up with something. It just so happened that Scurvy Jane dropped in for a coffee. She was telling us about her young daughter Denise who had a disagreement with her friend Jennifer Horton. Denise had started writing little prayers before she went to sleep each night. Scurvy Jane was showing us the prayer that Denise had written, the night before. Jill Y looked at me with the look of someone who realised she had just been beaten. I took a photo of the prayer and relaxed as the post was ready to go: 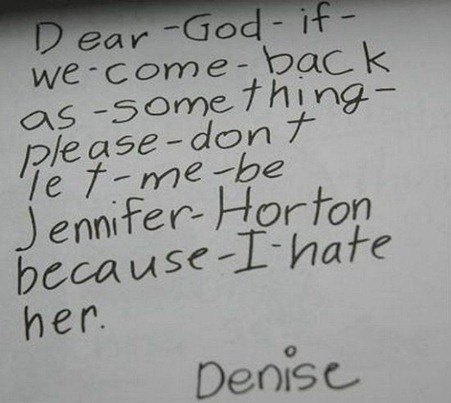