We’ve been trying to get a national day of remembrance to commemorate the day that Bon Jovi gave up making music. The main problem we have is that Bon Jovi haven’t actually given up making music yet but we’re a collective of focussed individuals and we won’t give up until our dream is realised and we make the world a better place for the children. Today we turn our attention to a different animal altogether. During a conversation with Jill Y about the lack of reading material on the internet for baby jaguar’s, we realised that there is indeed, a lack of reading material on the internet for baby jaguar’s. We couldn’t figure out how nobody had even attempted to reach out to this demographic. We also couldn’t figure out if we had an even a basic grasp of what ‘demographic’ means. I went up to the first baby jaguar I saw and we had a conversation about the lack of reading material available on the internet. I asked him to put his paw up if he and his friends were interested in joining our campaign to stop Bon Jovi making music and we immediately struck up a mutual beneficial working relationship: 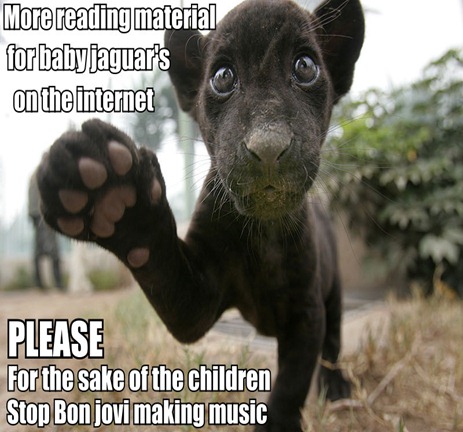