When Sugartastic Daddy John told Scurvy Jane that she had the sense of humour of a kitchen utensil, she thought he was being sarcastic. He wasn't. Some kitchen utensils are really funny but that's not really common knowledge so she wasn't to know. Maybe if he had said that she had the sense of humour of a cheese grater or a salt & pepper grinder, she would have understood him more clearly and taken his words as a compliment. The scurvy one finds it hard to take compliments but their conversation soon turned to her new boyfriend. They had just returned from a camping trip and The Daddy was telling her that he didn't like the new guy at all. Scurvy asked why and was told that the new man in her life hadn't got her best interests at heart. When Sugartastic voiced his opinion that he cared more about his bicycle than he did about her, she thought he was being sarcastic. He wasn’t. He was being honest as this picture clearly depicts: 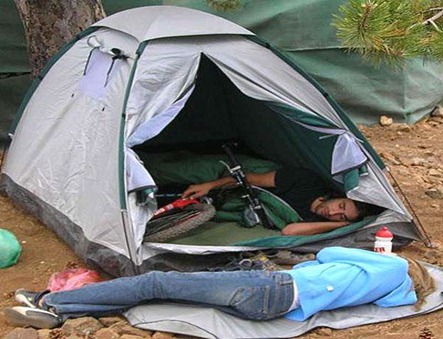