Chad the grad’s mum and dad were so glad, they took out an ad

This is the not very inspirational story of Chad, a not so smart lad. If brains were taxed, he’d get a refund. His antenna does not pick up all the channels. He has verbal diarrhea and mental constipation. If brains were gas, he wouldn’t have enough to drive around the inside of a Cheerio. When it came to exams, Chad was massively bad and because of this, his folks went raving mad but they were rich folk and spent a lot of money on helping him improve his grades. They say money can’t buy you love but it can buy your son the grades he can’t achieve by himself. The word on the street is that his folks greased the hands of the unprincipled principal and graduation was no longer a distant dream. They then decided to pretend that divine intervention was the reason for the turnaround in their son’s miraculous results: 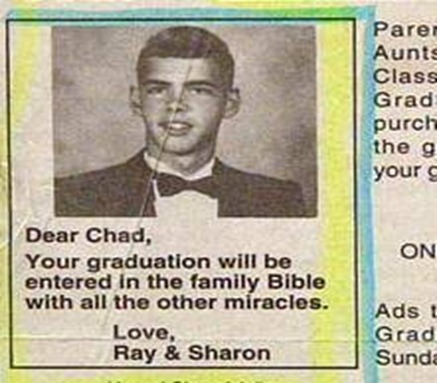 Email ThisBlogThis!Share to TwitterShare to FacebookShare to Pinterest
Labels: Chad the grad’s mum and dad were so glad, he wouldn’t have enough to drive around the inside of a Cheerio, humor, humour, If brains were gas, It's good to mock, Mocking, they took out an ad
Newer Post Older Post Home