I only know one person who is smart, has no fear of nuns and understands how magnets work. I don't actually know her name but she's Jill Y's sister. A woman of almost 'other world' qualities, she actually understands teenagers so she more than likely went to big school. She has two brats teenagers who of course know everything about everything but rather than listening to their constant whining and complaining, she grabbed a camera and spent some time inside their heads. It was whilst there, that she became at one with adolescence. Once she learned how and why they behave with total disregard for anyone except themselves, she was ready to unleash her plan. For years, she had a hopeful vision of the future where the teenagers would move out of the house and bother someone else but until now she had no idea how to urge them to leave the nest. She began placing carefully designed posters in selected areas where the teenagers were most likely to be, such as the kitchen and the bedrooms and before you could say anything at all, her plan had worked and she reclaimed her house and her sanity: 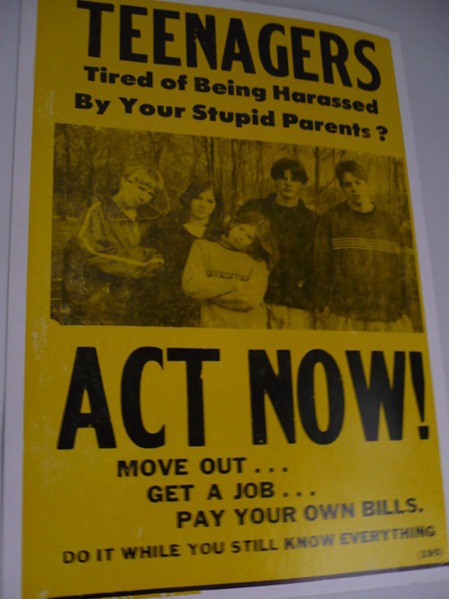 Email ThisBlogThis!Share to TwitterShare to FacebookShare to Pinterest
Labels: humor, humour, It's good to mock, Mocking, teenagers, The remarkable story of someone who got what she wanted by overcoming all obstacles
Newer Post Older Post Home