Love and marriage go together like custard and the economic principles of individual decision making.

Rumour has it that I’m not as brilliant as you think I am. If I was, I would be able to change the conversation when Jill Y brings up the topic of marriage. When she mentions the M word, she gets so excited that it’s hard to ignore her though I do a good job of trying. I haven’t seen her this excited since she accidently found out what country I hid the credit card in and went on a shopping spree that accidently turned the house into what looks like a shoe warehouse. I know she loves me and I love her and she loves shoes and I love trying to count the amount of shoes she has but I need to sleep every six days and never finish counting them. If you were to gather up all the receipts from the shoe buying and weigh them, they would weigh approximately the same as the population of China. Okay, that’s a slight exaggeration, they wouldn’t weigh approximately the same as the population of China but definitely a large part of India. It's as if she’s memorised ‘a billion reasons to get married pt.235’ and just randomly throws them at me when I sleep, in the hope that they’ll somehow seep into my consciousness. Little does she know that I’ve used my Jedi powers for the greater good and learned how to put myself into a trance when she mentions the M word. In this pensive state, I pretend there is no Bon Jovi and the world is such a better place for it. Last night though, she put up the greatest argument yet for getting married. She was talking about how happy, married people are and used the example of Scurvy Jane’s neighbours, friends, neighbours, friend and the look of contentment on her face on the day of her marriage: 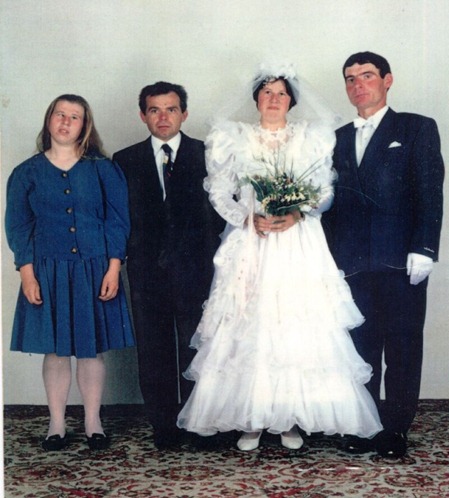 Email ThisBlogThis!Share to TwitterShare to FacebookShare to Pinterest
Labels: a billion reasons to get married pt.235, humor, humour, It's good to mock, Love and marriage go together like custard and the economic principles of individual decision making, Mocking, population of china
Newer Post Older Post Home