For the sake of the puppy, please don’t leave your child unattended

Sometimes, something happens faster than a bank manager turning down a loan application. We spent the day looking at colleges, not because we get a kick out of looking at colleges but because we need to make sure Little Dill Y goes to appropriate college. Some might say that it’s a bit early to be choosing a college but he’s 6 now so it’s about time we started checking out colleges. We decided to take a break and go for a coffee and asked the girl behind the counter if she knew what the strongest coffee in the world was and if we could have a couple of gallons of it. We had our eyes off the little guy for 2 seconds and when we turned around he had a drum on his head, a puppy under his arm and was jumping up and down screaming obscenities that even his Mother didn’t understand. It was one of the most surreal things we’ve ever seen and just couldn’t understand what was happening. Then we noticed the sign behind the counter and it began to make as much sense as 67 cents – 67 cents: 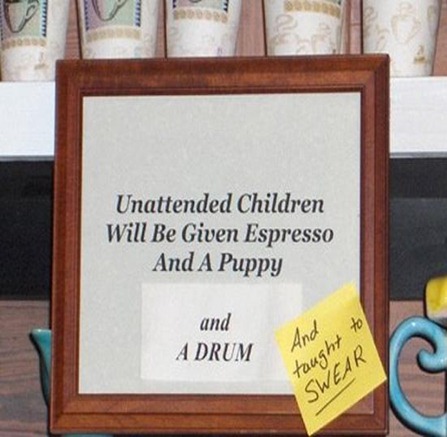