Einstein’s theory of why Bon Jovi are so bad

We're working our way through the classics at It's good to mock, dispelling unpopular myths as we go along. Today we're working with Einstein’s theory of why Bon Jovi are so bad. We have definitive proof that this theory does NOT exist. Albert Einstein was born in 1879 and died when he was 76 in 1955. In 1983, 28 years after Einstein's death, Bon Jovi  began creating their mundane, so called music. If we take the factual viewpoint that Einstein was dead before Bon Jovi became a so called band, we can safely assume that he did not produce a theory about them. Tomorrow It’s good to mock disproves the little held belief that Shakespeare wrote Star Wars: 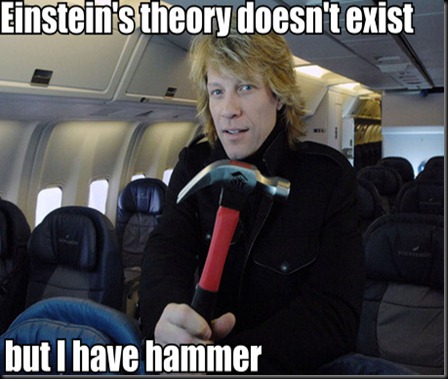