So much to do, so little time

Today was a day unlike any other for today was the day I watched daytime television. Don’t ask me how it happened but I had a day off work. After calling in just to make sure it wasn’t some crazy drunken dream, it was confirmed, I actually had the day off. A level of excitement ran through me which I hadn’t felt since the last time I had a day off work, some time in the late 14th century. Then it dawned on me that I had made no plans and had time to myself to do what I wanted. What would I do?
Thirsty Dave asked if I wanted to go for a beer with him but I told him I only had one day off and not the two weeks it would take for him to drink the pub dry. I thought of working on my book ‘987 reasons why Bon Jovi shouldn’t exist’ but I had 675,988 reasons why they shouldn’t exist and wasn’t in the humour of discarding any of the reasons as they all make so much sense to the well being of music as we know it. Jill Y asked if I wanted to help her with one of her secret experiments but the last time I done that, she made me drink some thick green liquid concoction. Later that night, I was fully convinced I was being chased by Pac-Man so I politely declined her offer this time.
There was so may things to do. I could embarrass Little Dill Y by picking him up from school dressed like Barbie and hand him some dolls in front of his friends. I could start a political party for proportionate and disproportionate dwarfs and use the tagline "The small party with big ideas". As usual, my mind was moving far too fast for my body so I decided to clear out all of my thoughts, sit sown and turn on the television to watch some of the daytime stuff I had heard so much about. I had heard all about the chat shows and the bizarre topics they covered but was totally amazed by what immediately confronted me: 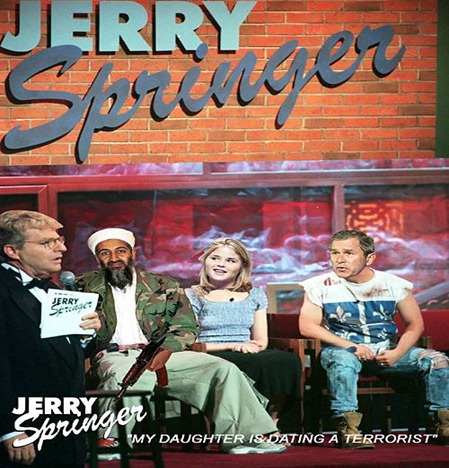