This is more than likely not going to make us millionaires so I think we're safe enough sharing the idea with you. Jill Y is a Scientist and gets to work on some pretty cool secret stuff. Nobody believes she invented a time machine and if nobody believes it, it leaves us to get on with the our main objective. I can't exactly tell you what the main objective is but imagine there was a band called Bon Jovi. Now imagine you detested this band with every fibre of your being because the so called music they produce is a banal, colour by numbers, mundane attack on the aural senses. Now imagine you had access to a time machine. It would probably occur to you that you could go back in time and remove all traces of Bon Jovi before they actually became Bon Jovi, thus improving the world and making society a better place for generations to come. As I mentioned earlier, Jill Y's latest invention is probably not going to be made into a film like that guy who invented the hula hoop but I think it’s a good invention she’s come up with. Imagine a hot knife. Now imagine a really hot knife. Now imagine a really, really hot knife. As I said, it may not be a totally groundbreaking idea but I can see at least one practical application for it: 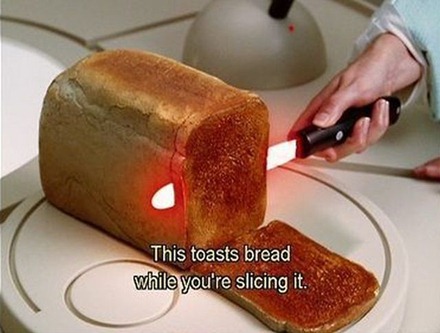