The following events take place between 8am 17-02-11 and 11am 18-02-11. Little Dill Y was accidentally exposed to the music of Bon Jovi so we immediately rinsed his ears with the music of Nick Cave. He didn't seem to be infected but there was no way Jill Y was going to take any chances so we called Nick Cave but he wasn't in. We then called Leonard Cohen but he wasn't in either. What happened next was something we'll never forget. We called some of the most credible artists in the world but all we got was a recorded message:


Your call is very important to us. Your call will be answered in the order which it was received


After 25 hours of calling and listening to recorded messages, the artists we attempted to get through to, became less credible. We couldn't reach the real people like Tom Waits, Iggy Pop and Rufus Wainwright. We did reach Jason Donovan, Rick Astley and Peter Andre but we didn't want to talk to any of them and all of a sudden we were listening to that recorded nonsense again:


Your call is very important to us. Your call will be answered in the order which it was received


We were starting to lose patience at this stage so we pressed 1 and got through to Justin Beiber. To say we were disappointed is a massive understatement but someone had to come out and exorcise the Bon Jovi demons so we begrudgingly agreed that he would have to do. Jill Y was still fuming because we had to listen to all those horrible recorded messages so she bought a new doormat to welcome the sad, pitiful excuse to our home: 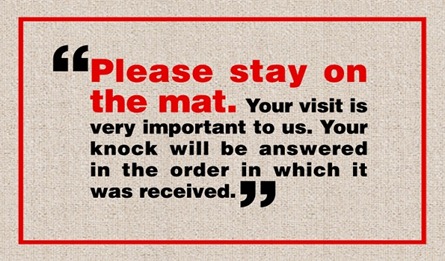