Crushed by the wheels of attraction

As it's St. Valentine's Day we thought we would share our recollections of our first crush. In a somewhat surprising outcome, we were all 11 or 12 when it happened.


Sugartastic Daddy John's first crush was when he was 12. He was getting his hair done and a dude walked by with the kinkiest afro imaginable. As soon as he laid eyes on the fro he had an erection. To this day Sugartastic has some of the most far out, frizziest of funky hair.

Thirsty Dave was 11 when he made his first batch of home brew and the day his first batch was ready for consumption was the day he has his first crush. Word of mouth is a great advertisement and before long people came from afar, eager to sample the fine brew. One of the strangest things about the concoction was that rather than drink it, people put it in the engines of their cars. NASA bought up an entire batch and it was responsible for one of the most successful rocket launches yet but I'm not allowed to talk about that so we'll move swiftly on.


Scurvy Jane had her first crush when she was 12. It was a sweltering hot day and she had a drink of orange juice for the first time. She talks of a tingling sensation throughout her body. Jill Y tells me that women get the same sensation with the use of toys and on occasion, men.


Jill Y was 11 when she had her first crush. She read about vibrational frequency of diatomic molecules. Enough said.


My own story is fairly boring in comparison to the rest of the collective but in the interest of fair play, I'll briefly tell you about it: 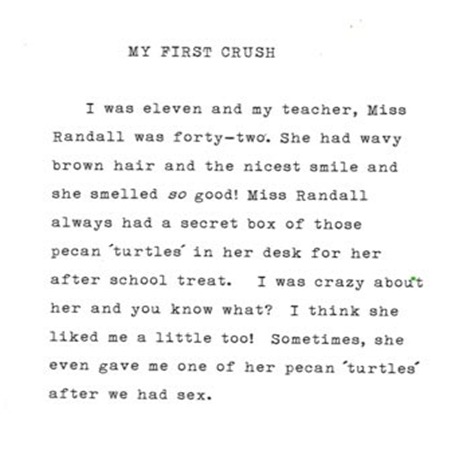