Candy Sweetcheeks is Sugartastic Daddy John's 1st wife and his 26th favourite. She would of made the top 25 but she has a problem with sharing and wouldn't agree to the 25 way.  She was telling us about the day she collected her exam results back in June 2006. She had studied hard and done really well. As she opened the envelope with the results in it, she was punched in the face for no apparent reason. As she told the story, I remembered that the first time I became disillusioned with the world was on 06/06/06. Coincidentally, I first heard Bon Jovi after watching The Omen on 06/06/06 at 6.66pm after discovering the strange birthmark on my head. I  have since found out that Justin Bieber's haircut like all emo haircuts, is carefully designed to cover the part of the head which reveals the owner of the haircut to be the anti-christ. Therefore it has come to my attention that 06-06-06 + Bon Jovi +Justin Bieber = the coming apocalypse. Luckily, Candy Sweetcheeks as well as being a hairdresser is also an ordained priestess of the church of the latter day Chuck Norris Fan Club and we all know that members of his church have spiritual access to his strength and the ability to live forever. So we know they're strong enough to beat down those satanic emo kids when they finally start to rise and attempt to take over the world. It gave me great pleasure to explain to Candy that the reason she was punched in the face was due to the fact that she was the first person to sport a Justin Bieber haircut: 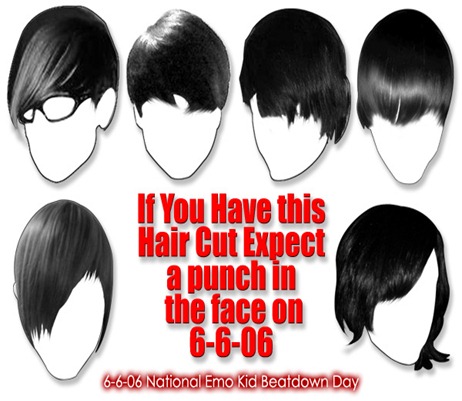