The only thing worse than been kidnapped by Somali Pirates is going to the toy store to buy that all important board game only to realise they don’t have it in stock. I was looking for Connect Four - the classic game where the first player to get four coloured checkers in a row either horizontally, vertically or diagonally wins. I think the optimistic sales guy was on commission because he tried to convince me that they had a game in stock which was ‘something similar’ to what I asked for. I ended up buying it in the end but it wasn’t exactly what I was looking for. 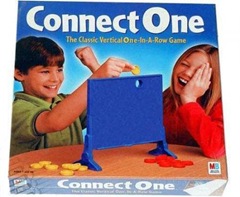 There was just something different about this game. I couldn’t quite put my finger on it but it was as if it was somehow easier to play than Connect Four. Not to worry, I’m sure I’ll get hours of fun out of it. Bill Y
Posted by Bill Y at Sunday, December 27, 2009