Every sometimes, we like to share something with the world that’s only known by a handful of people. The only reason we know so much is that we have a time machine and travel back and forth in time, quite regularly. There’s a lot we can’t speak of because it hasn’t happened yet but let’s just say that in the near future, it will rain and then it will stop. Our favourite film hasn’t been made yet but our second favourite film is Star Wars. We were lucky enough to see a version of the film that wasn’t released and Yoda T was brilliant in it: 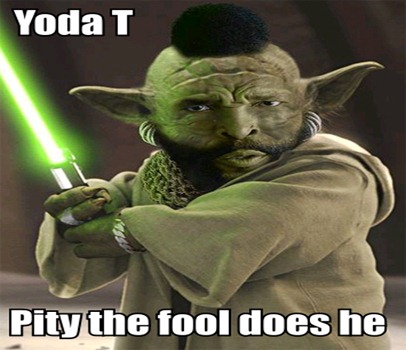 Email ThisBlogThis!Share to TwitterShare to FacebookShare to Pinterest
Labels: humour, it will rain and then it will stop, Its good to mock, Mocking, Pity the fool, Star Wars, Yoda T
Newer Post Older Post Home