One day a talented but down on his luck musician discovered a magic lamp and rubbed it. A genie appeared and as you can imagine, granted him 3 wishes. The talented but down on his luck musician immediately wished that his band could write and record a double album and release it to critical acclaim. As he was a talented musician, he wrote a double album of songs with imaginative titles such as 'I didn't know how brilliant I was until you filmed my life story and it won an Oscar',  'Hula hoops – discuss?' and 'you don't bring me disillusionment any more but you do bring me to my senses'. The album was critically acclaimed so for his second wish, he wished to play in huge stadiums around the world. For the next two years, the band played their critically acclaimed double album in huge stadiums throughout the world and became well know as a great live band with critically acclaimed songs. For his third wish, he wished the band could become Bon Jovi. No sooner had they become Bon Jovi, than the musician began to feel empty inside. This was because Bon Jovi release music with no artistic relevance and the musician placed a great deal of importance on producing music with relevance. The rest of the band began playing bland, trivial music with massively obvious song structures and song titles such as 'bed of roses', 'last cigarette' and 'back door Santa'. The musician and the band were forever miserable, locked in a talentless band full of despair and misery.  The moral of the story is - be careful what you wish for or you could become Bon Jovi.

Someone else who should of been careful what she wished for, is Jill Y's mother or should I say father: 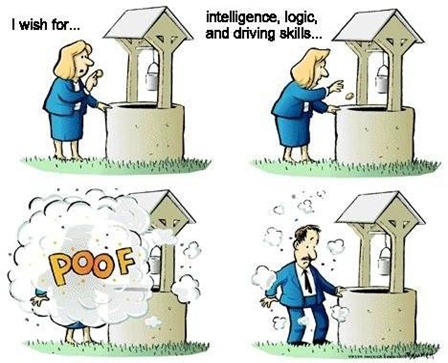