When the music’s over, I sometimes fall asleep

When the magic happens, the magic happens and it's a beautiful thing. Despite disagreeing with each other over the little things like global warming or the big things like Pepsi and Coca-Cola, it all makes sense under the covers where lust takes over. The event takes anything from 2 minutes to 9 hours and during that time, I forget that she's a total lunatic. Last night was a particularly energetic workout and when I looked back over the footage this morning, I realised that we broke a new record of 10 and a half hours. I don't remember much about the end of it because that’s when I fell asleep. This had the effect of causing argument no. 879 and then she was back in ultra psycho mode, yet again. I really don't see what the problem is. A man can only do what a man can do but she somehow sees it as a reflection of how I feel about her rather than the sheer physical exhaustion of making the earth move. I told her that after working up a sweet sweat like that, a man will sometimes fall asleep. In fact I went one step further and tried to convince her that it's not only people who have this problem: 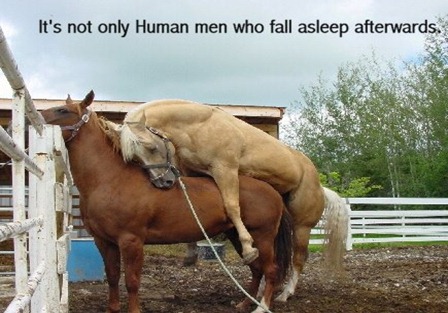 Email ThisBlogThis!Share to TwitterShare to FacebookShare to Pinterest
Labels: humour, I sometimes fall asleep, Its good to mock, Mocking, sheer physical exhaustion of making the earth move, When the music’s over
Newer Post Older Post Home