Little Dill Y is an open minded 5 year old. He goes to a multi - denominational genius school and has been brought up to like or dislike people depending on whether they listen to Bon Jovi or not. He has plenty of friends from different races and religions and we feel this broadens his horizons. When he comes in from school, there’s nothing he likes better than making a poster and going out campaigning about an unjust cause. We’re pleased that he’s developed a social conscience at such a young age but we always have a chat with him just to make sure he fully understands what he’s getting himself into. The other day he was all ready to head out to a march about God hating cigarettes until we sat him down and told him that if God exists, he doesn’t hate cigarettes and that he places equal relevance on cigarettes, cigars and anything else that people smoke: 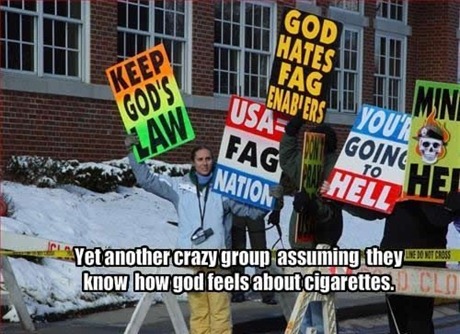