Until someone invents a device consisting of a circular canopy of cloth on a folding metal frame supported by a central rod, for protection against rain, I'll continue to get wet when it rains. It's written in the scriptures that he/she/he-she who mocks Bon Jovi, who really mocks Bon Jovi with all their sarcastic might, will be rewarded with music of melody, rhythm and harmony. If the scriptures are to be believed, I've a serious amount of good music to look forward to. Sugartastic Daddy John is a forward thinking individual. He recently found himself in a situation that would have got the better of most of us but ‘The Daddy’ loves a challenge. He began coaching a rowing team but due to cutbacks, they had no money for a boat. Rather than swim away from the job, he had a word with one of his associates who acquires things by less than legal methods. He then made the boat invisible and continued doing his thing: 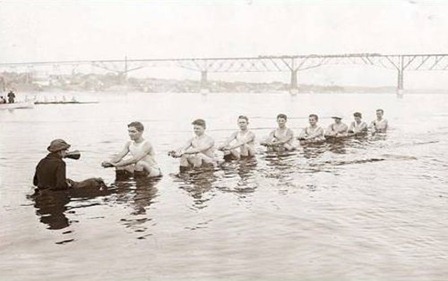 Email ThisBlogThis!Share to TwitterShare to FacebookShare to Pinterest
Labels: Bon Jovi Hatred, humor, humour, Its good to mock, Mocking, Sugartastic Daddy John was up the creek without a paddle or a canoe but some creative thinking soon saved the day
Newer Post Older Post Home