The signs are there for all to see

For someone who loves the limelight, comes alive in a crowded room and currently makes a living as a public speaker dressed like Lady Gaga, Scurvy Jane is becoming a quiet, withdrawn, unassuming character. This is surprising as she was voted ‘most likely to stalk any 2 members of Bon Jovi and tell them how unbelievably bland their so called music is’. Subtlety wouldn’t be one of her strong points. When she stalked 2 members of Bon Jovi to tell them how unbelievably bland their so called music is, she done it dressed like Lady Gaga and drew nothing but attention to herself. The last time Jill Y told her a secret, she promised to keep it to herself and she kept her promise and did indeed keep it to herself and Facebook and Twitter. In a move that’s as baffling as how magnets work, the scurvy one has only gone and put road signs outside her house in a bid to deter people from visiting her: 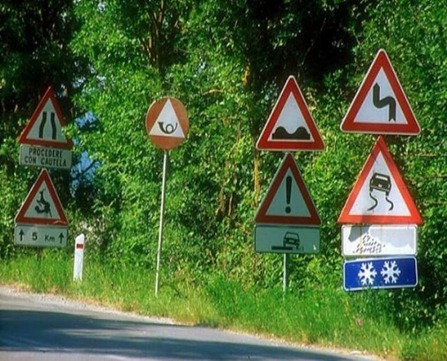