The power of negotiation

When Scurvy Jane borrowed €10, 000 from the bank, she negotiated a very unusual deal. Rather than paying back any interest, she agreed to teach the bank manager how magnets work. This may sound like a good deal but nobody actually knows how magnets work so the scurvy one just made up a load of nonsense and the bank manager bought every word of it. It’s the same with Maths – nobody understands it so anyone can claim to be a Maths teacher and teach the subject. Because nobody understands it, nobody can say if it’s incorrect or not. We’ve been trying to get our country to recognise a new national holiday but apparently ‘Dislike Bon Jovi Day’ takes a great deal of legislation before it can be realised. I’ve just returned from a meeting and couldn’t figure out why everybody laughed as soon as I walked into the room. I was really beginning to feel self conscious but they were actually laughing at Sugartastic Daddy John’s dog. I knew I shouldn’t have brought him with me as he usually draws attention to himself: 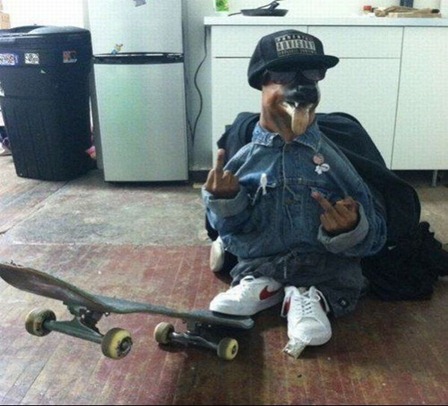