Who the hell do we think I am?

I don't like arguing with people so I recently began arguing with myself and have been winning 100% of the time. He's forever losing the arguments between us. I'm not an arrogant pig and never go on about how bad Bon Jovi are. He's such arrogant pig. He never stops going on about how bad Bon Jovi are. If you've never argued with yourself, you don't know what you've been missing. He'll probably tell you about his 'great' sense of humor next'. I think it was me who said 'Bon Jovi are about as entertaining as a TV test pattern" but that's not important right now.  The problem with arguing with yourself is he's so self centered. I'm not self centered at all. Yesterday, we had the mother of all arguments. I was arguing that modern neuroscience has proved that all our actions and decisions are merely the machinations of a predetermined universe and that our concept of 'free will' is naught but a comforting illusion. I didn't come to any conclusion, can  barely spell the word and can’t read. He came to this conclusion when he read a book about it: 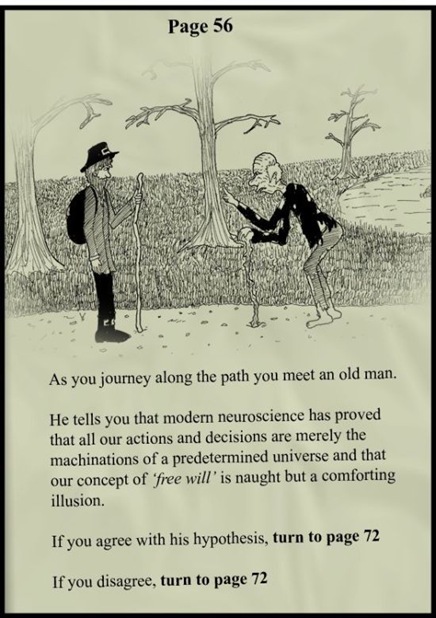 Email ThisBlogThis!Share to TwitterShare to FacebookShare to Pinterest
Labels: arguing with myself, as entertaining as a tv test pattern, Bon Jovi, humour, Its good to mock, Mocking, Who the hell do we think I am
Newer Post Older Post Home