Q. Why do women cry - A. Because someone put Baby in a corner.

Life is all about learning and if there's one thing we like at It's good to mock, it's learning about women. Some might say, trying to understand a woman is like trying to understand something that's very hard to understand. We put on our lab coats and felt all scientist like. There's no point in walking before you can crawl because you'll spill the milk and won't have a leg to stand on so we decided to take what we thought was a simple question and work on it slowly and methodically. The question we chose was: Why do women cry? We called in a few favours and got a friend to bring in a calculator. We shut ourselves off from the distraction of all those lolcats on the internets and knuckled down to some serious work. After a lot of head scratching, we were very itchy on the top of our heads and settled on the following answer. We’re  not going to lie to you and say it’s a scientific fact but we think we the following speaks for itself: 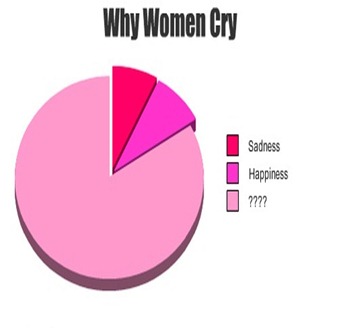 Email ThisBlogThis!Share to TwitterShare to FacebookShare to Pinterest
Labels: humour, Its good to mock, lab coats, Mocking, someone put Baby in a corner, why do women cry
Newer Post Older Post Home