You might be sitting on a bus, empty except for the driver and you. You might be in a bad mood. The only thing that might put you in a worse mood is someone getting on the bus, ignoring the many empty seats and for some inexplicable reason, deciding to sit next to you. You might begin to grit your teeth and half quietly say to yourself "Why on an empty bus with all these empty seats, did this guy choose to sit next to me?" You might be tempted to throw a ‘Seriously WTF?’ glance in his direction but you don't see why you should have to. There's no reason to his madness, no sense to his senseless act of shunning all those empty seats. You just can’t seem to figure out what has gone wrong with the world. Has the earth shifted off its axis? Do people now come with magnets attached or do some people just take pleasure in stealing my personal space? How are kids supposed to grow up in such a crazy world as this? Where did it all go wrong? I blame the person who’s fault this is. There’s only one thing which is worse than this and it’s kind of similar except there’s no bus and no seats involved: 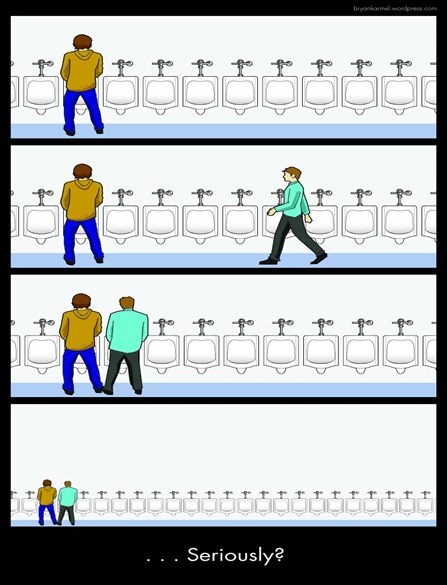 Email ThisBlogThis!Share to TwitterShare to FacebookShare to Pinterest
Labels: humour mocking, Its good to mock, no reason to his madness, Seriously WTF, what has gone wrong with the world, Where did it all go wrong
Newer Post Older Post Home