In 1955, award-winning playwright Tennessee Williams sent a copy of his new play, Orpheus Descending, to friend Marlon Brando along with a letter. Brando wrote a letter back explaining that he read the play three times and thought it was the best work he had ever done. He also wrote ‘I have been afraid for you sometimes, because success sings a deadly lullaby to most people’.

Today, It’s good to mock celebrates success. We will however heed Brando’s warning not let it get to our massively confused heads. Cast your mind back to yesterday and you may remember the mask we gave you of the legend that is Christopher Walken. A mere few hours have passed and we received a picture via the medium of electronic mail from reader Tom ‘too much time on his hands’ Donnelly. Not only did Tom make the mask, he creatively coloured in Walken’s hair and lips: 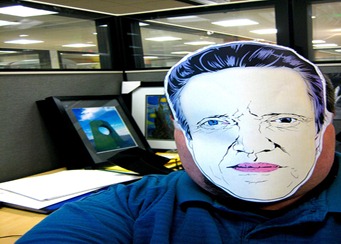 We salute you Tom and will recognise your genius like talent for many moons to come for it is people like you, who make life worth living. Much respect.