Jill Y and I sometimes worry about what the future will hold for little Dill Y. We’re perfectly happy that he’ll be a genius. That part doesn’t bother us at all. He’s 5 now and it’ll probably be at least another couple of years before he makes his first million and we can retire and live off his money. What concerns us is the declining state of society in general. Between global warming, the carbon footprint and allowing Bon Jovi to release music, we haven’t got a good track record on this planet at all. And what about the kids who are even littler than little Dill Y? His nephew and niece were at the beach the other day and when they came home I was shown this picture: 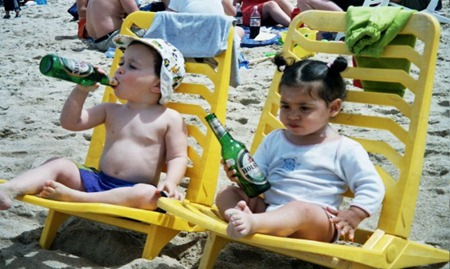 I just don’t know what’s gone wrong with this world. How can you allow young kids to drink Holsten Pills when there are obviously much better beers on the market? It’s just shocking behaviour and it needs to be stopped as soon as possible. I blame the parents.

NB: It’s good to mock not only condones kids drinking Holsten Pills, we condone kids drinking any beer as whiskey is our preferred poison.

Email ThisBlogThis!Share to TwitterShare to FacebookShare to Pinterest
Labels: A genius in the making, allowing Bon Jovi to make music, humour, Its good to mock, Jill Y and I sometimes worry about what the future will hold for little Dill Y, Mocking
Newer Post Older Post Home