Some sequels are better than the original

It wasn’t that long ago that Jill Y made me go to a see a chick flick and I really don’t like those films at all. My idea of a good film is Back to the Future, Back to the Future ll and Back to the future lll.  The only reason I agreed to go to see the film is that she promised she’s do certain ‘favours’ for me that she’d never done before. The film she chose was called Brokeback Mountain. As I slept through most of it, I’m not exactly sure what it was about but this review was taken from a movie website:

Set against the sweeping vistas of Alberta's Rocky Mountains, this film tells the story of two young men - a ranch-hand and a rodeo cowboy - who meet in the summer of 1963 and unexpectedly forge a lifelong connection, one whose complications, joys and tragedies provide a testament to the endurance and power of love.

I woke up at the end as the audience in the cinema were clapping loudly. They’ve just announced a sequel to the film and as I’m a nice guy, I think I’ll bring Jill Y to the premiere. I have to say I was really impressed with the poster for the film and the cast looks massively interesting too: 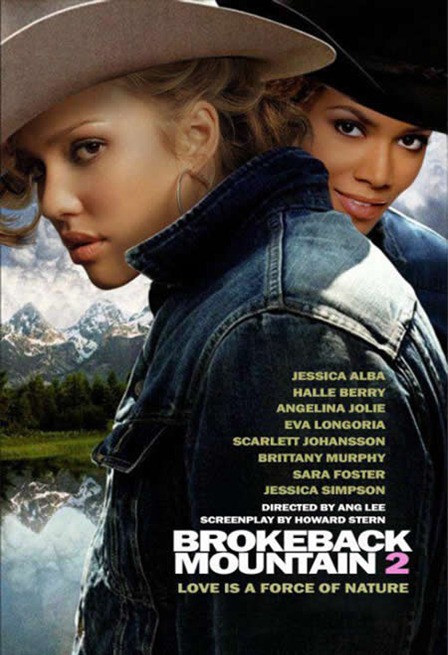 Email ThisBlogThis!Share to TwitterShare to FacebookShare to Pinterest
Labels: Back to the future, Chuck Norriss, humour, Its good to mock, Jodie Foster, Mocking, Nunchucks, Nuns, Some sequels are better than the original
Newer Post Older Post Home