Not a very technical way to resolve an argument type thingy but one that works anyway.

We’re simple folk at It’s good to mock. We use simple ways to solve the more complex issues. This is not because the simplest way is necessarily the best way, it’s just that we’re not very bright and can usually only think of the massively obvious. Jill Y wanted to get an iPad and was going on about how beneficial it would be to have one. I told her that an iPad was about as useful as Blu-Tack and this of course escalated into a major discussion/argument type thingy. We wrote out a list and compared the iPad to Blu-Tack. It was a closely fought contest that ended in a 1 – 1 draw: 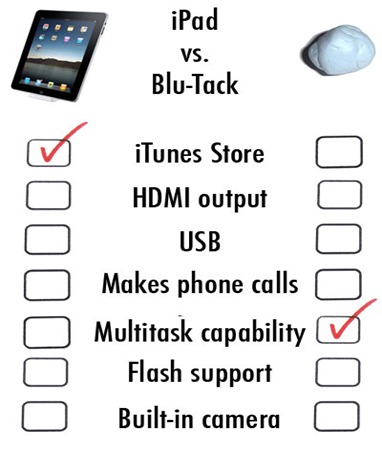 Email ThisBlogThis!Share to TwitterShare to FacebookShare to Pinterest
Labels: humour, iPad to Blu-Tack, Its good to mock, Mocking, Not a very technical way to resolve an argument type thingy but one that works anyway
Newer Post Older Post Home