Little Dill Y is a good kid, well most of the time. He’s one of those natural born leaders. Allow me to mention words which will hopefully explain my stance on this very matter:

If you’re never watched the film Toy Story, please see below synopsis for we believe Toy Story is central to this story:

The delightful Toy Story provides the answer to the a kid's most important question: What happens when you leave toys alone in a room? Well, it seems that they come to life! Young Andy's playthings, including the sardonic Mr. Potatohead, a Slinky Dog with a southern drawl, an anxiety-ridden dinosaur, and some very gung-ho toy soldiers, are led by Woody, a pull-string cowboy doll whom Andy adores. But on his birthday, Andy receives a self-possessed, gadget-laden spaceman action figure named Buzz Lightyear, who quickly becomes Andy's favorite. Soon the overlooked Woody becomes very jealous. But when a turn of events leaves Buzz and Woody lost in the "outside world," they have to get along in order to find their way home. And they'd better do it quickly, because the lad and his family are moving tomorrow! However, their trek is interrupted by Sid, Andy's cruel, malicious neighbor--who loves to destroy toys...

So we sat down to watch Toy Story for the first time with Dill Y and the little guy was so excited and animated and really enjoyed it. When it was over he started playing with his toys and his imagination was hyper. If there’s one thing Jill Y and I encourage, it’s imagination. I took some great pictures but there was one which caused some concern: 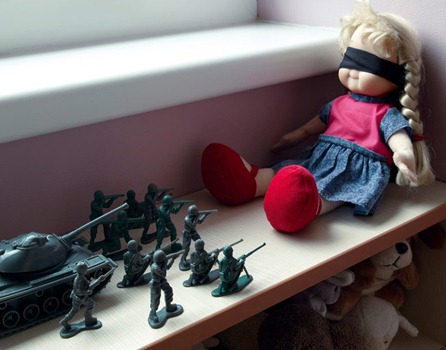 On first reflection, it just looks like some soldiers shooting a blindfolded doll but on closer inspection, the following questions arise:

2) Why are the soldiers about to kill the doll?

It took a while to find the answers to these questions but according to Dill Y, the doll was a war criminal and he had given the orders for her to say “bye de bye”. Jill Y was happy that he decided to blindfold her before going through with it. We  were so proud. Our natural born leader had shown compassion for the first time.