Drink the right juice, or else…

I heard a joke. I won’t say it’s the funniest joke I’ve ever heard but when a 7 year old gets all excited and tongue tied when she’s trying to explain it, you just have to pretend it’s the funniest thing that anyone ever said to you. To be honest, I didn’t get it at first. See what you think:

Does it make sense to you? I was then dragged to a computer and shown the following: 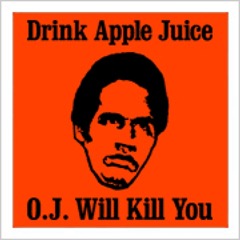 Then it became funny-ish. Well, as funny as a 7 year old knowing about someone who was acquitted of murder and is currently serving a jail sentence for armed robbery and kidnapping, can be.