There are certain things in life which disgusts to the core of your very being. For It's good to mock, these would include Clowns, Bon Jovi and women with beards. Conversely, there are things that restore your faith in humanity such as Chuck Norris, women who kiss each other when they’re drunk and when you realise that little Dill Y has put the moves on a young lady that he picked up at the local shop. We should probably explain that last one in a bit more detail.

Jill Y and I, took little Dill Y to the shops. He became massively animated as soon as he saw a doll with blonde hair and wouldn’t stop until we bought it for him. Jill Y was concerned because he wanted a girly doll rather than a manly action man but for the sake of stopping him throwing things at the shopkeeper, we caved in and got it. No sooner had we arrived home and taken him out of his pram, than he got down to business and we were just the proudest parents ever. This picture is definitely going to be framed: 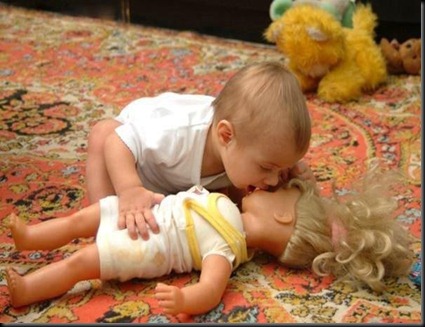 Email ThisBlogThis!Share to TwitterShare to FacebookShare to Pinterest
Labels: Baby got moves, Chuck Norris, humour, Its good to mock, Mocking, Women who kiss each other when they're drunk
Newer Post Older Post Home