We like to think we're a helpful collective at It's good to mock. When Scurvy Jane found a magic lamp and rubbed it, a genie appeared and offered her three wishes. Rather than ask for something for herself she thought of humanity and wished for Bon Jovi to disappear three times. Thirsty Dave won his weight in beer. Rather than share the beer with anyone else, he drank it himself which prevented me from getting drunk and falling home which prevented Jill Y becoming an antichrist when I got home. Sugartastic Daddy John has far too many wives. The last time we counted there were 26. Rather than make a young lady unhappy and not marry her, he agreed to get married again. That's how much he loves his fellow woman. Recently a white cat joined us and if you think we're helpful, check out how helpful this helpful cat is: 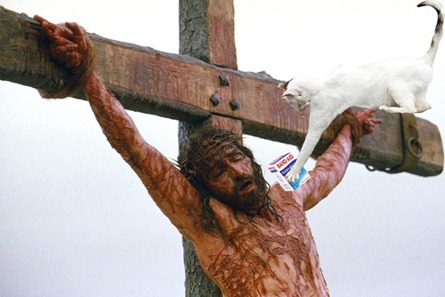