This is not a brothel

People - when you boil it down, we're pretty much all the same. When something is forbidden, we immediately want it more. When I was a little mocker, I used to used to play in the schoolyard and as soon as I came across the sign saying 'no climbing' I immediately began to climb anything that was even close. It's human nature for a child to want to do what they're not supposed to do. When I was a teenager, I would always go for the girl who was out of my league (and most of them were) because it's human nature for a teenager to want what they're not supposed to have. Yesterday I was walking by this house and I had no option but to knock on the door. It was nothing to do with human nature, I was just curious: 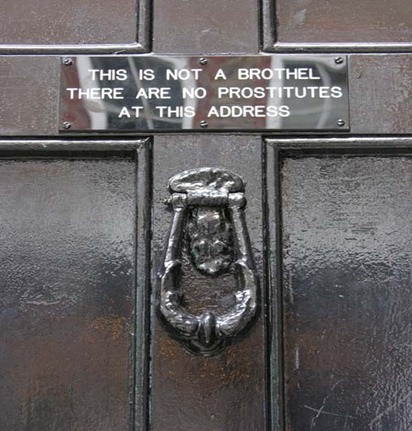 Email ThisBlogThis!Share to TwitterShare to FacebookShare to Pinterest
Labels: humour, Its good to mock, Mocking, This is not a brothel, we immediately want it more, When something is forbidden
Newer Post Older Post Home