The classic kick in the face: No job without experience and no experience without a job

It’s so hard to remain positive when the economy just keeps on getting worse and the Government seem as competent as a sober Thirsty Dave. So many people have lost their jobs and are having massive problems in securing any type of employment at all. Jill Y’s Mother was telling us that she’s seen it all before. Her musician friend Jimi, went for a job many years ago and despite his massive talent, found himself in a catch 22 situation: 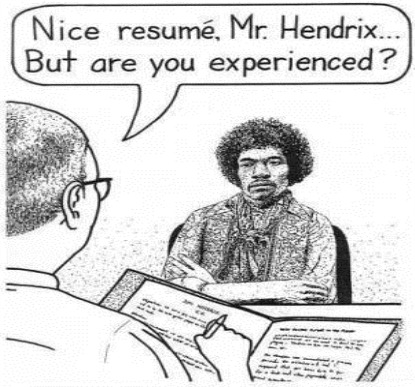 Email ThisBlogThis!Share to TwitterShare to FacebookShare to Pinterest
Labels: catch 22, humour, Its good to cat mock, Jill Y, Jimi Hendrix, Mocking, The classic kick in the face: No job without experience and no experience without a job, Thirsty Dave
Newer Post Older Post Home