The glass is always 2 halves full

Jill Y’s job involves testing theories. She’s a scientist and nearly twice as smart as 5 year old Little Dill Y. In the beginning, it was hard to accept that I’ll never come close to their level of intelligence but as time went by, I’ve learned to live with my many limitations and have grown to be a at one with my inadequacies. One day I’m going to write a book about it but that’s a story for another day. Today, we focus on a simple remark I made to Jill Y while pretending to understand what she was rabbiting on about. I just happened to mention that Thirsty Dave is an optimistic guy who always see’s the glass as half full. Little Dill Y picked up on this and thought he would voice his opinion: 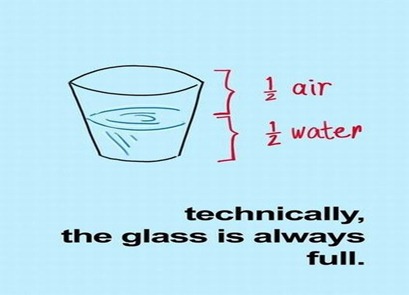 I think I’m going to have to learn something about something before I become as useful as a chocolate teapot.