I, Bill Y solemnly swear that I am NEVER drinking again

I don't think it matters how I attempt to explain this. It's going to sound weird so here goes:

It began in a time I like to call - Yesterday. Yesterday began like other days. I took myself out of bed and into the shower. I went to work and came home from work. I had some food, mocked a little and then Jill Y told me that we were invited to a party. I was totally up for it so I jumped into the shower and out of the shower and had a glass of something Jill Y had made. At this point I should point out that Jill Y is a Scientist and the 'glass of something' was a little something she invented herself.

We went to the party and  it wasn't long before we bumped into our old friend Sugartastic Daddy John. He immediately asked if I was alright and said I looked “slightly less than perpendicular”. I told him I didn't feel good at all and that's when it got weird. All of a sudden I was playing Pacman and when I say I was 'playing' packman, I mean I was actually in the Pacman game, eating dots and watching packman chase ghost monsters. Even thinking back now, it was so realistic and the more I ate the fuller I became. Then without warning, both Pacman and I were defeated and I was back home in the toilet. If Jill Y didn’t record this, I wouldn't have believed it myself: 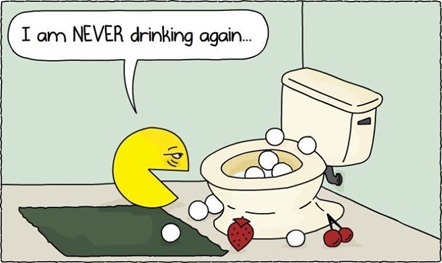