Thirsty Dave has been a vegetarian ever since he realised there was no beer in meat. Every day at a certain time, after consuming copious amounts of alcohol, he can be heard speaking in languages nobody can understand but that’s only because he’s drunk. It’s because of the thirsty one and his constant moral stand on not eating meat, that Jill Y, Little Dill Y and I have become vegetarians. Imagine then, the total shock when I went to into his fridge to grab a beer and was confronted with this: 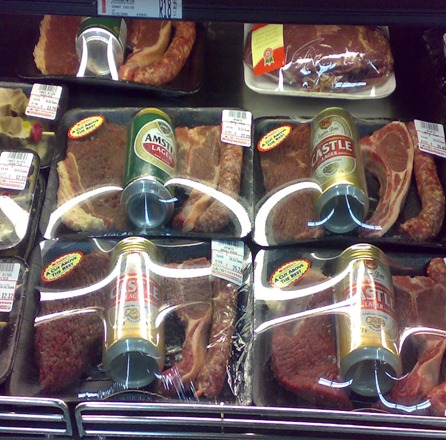 Email ThisBlogThis!Share to TwitterShare to FacebookShare to Pinterest
Labels: humor, humour, It's good to mock, Jill Y, Little Dill Y, Mocking, no beer in meat, Thirsty Dave is the type of vegetarian who has 36 steaks a day, vegetarians
Newer Post Older Post Home